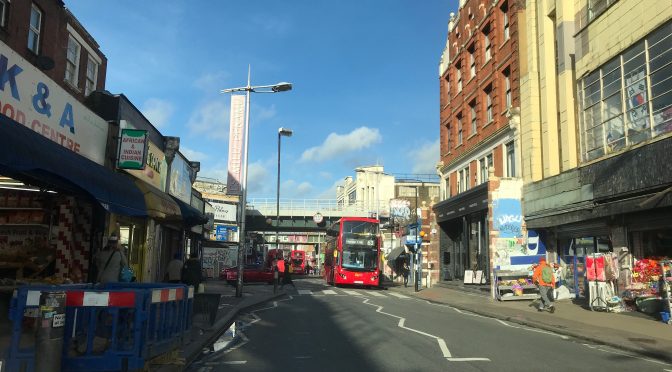 Since we were traveling through London on the way to India, we expanded our trip to be able to share several times south of London. We also wanted to make contacts and to begin looking at the most effective ways to share the Gospel for a return trip. Over the weekend through Tuesday we shared with about 300 people in the Brixton and surrounding areas and have come up with some creative ways to reach people on a return trip which we are prayerfully considering.

We also took a few days to show Nathan, Titus, and Ezri some of the historic sites including the Tower of London, Piccadilly Circus, Buckingham Palace in London as well as visiting Oxford to see the castle and to eat at the Eagle and Child where C.S. Lewis and J.R.R. Tolkien and others of the “Inkings” used to gather to fellowship and to discuss their writings (such as Mere Christianity, the Chronicles of Narnia and the Lord of the Rings). The picture below is us sitting in the exact area where this group used to meet.

After church this past weekend, we were walking to the Tube (London subway) down a very busy street in Brixton. Just in front of us there was a church with about 15 members lined up in of it. Most of them were holding signs with Scripture verses, a couple were trying to pass out tracts and a preacher was preaching over a microphone. I watch as people passed them without even a glance. They literally walked by as if the church people were invisible, as if there was a huge wall between the people of the church and the people passing by.

But, on the other hand, the next night we were in Piccadilly Circus, which is a hub of activity, stores and restaurants and a crowd caught our eye. About 50 or more people had stopped to watch a street performer simply dancing to an upbeat song. But the people were engage. The contrast of these two painted a picture for me of the benefit of using creative tools to reach people in “post-Christian” London.

If the Lord gives us the opportunity to come back, I want to try to get a permit to do some “street performing” of our own–eating fire, getting in six-foot balloons, doing ventriloquism and illusions as a way to draw people in to hear the Gospel. When we used this strategy on the streets and in parks in Mexico and Venezuela, it was amazingly effectively. I think people in London wouldn’t stop to listen as long as they did in those countries but I believe they would stay for a 10 minute engagement. This is one of the approached we’ve already discussed with the church that ask us to come and the church leader we’ve been working with he completely agrees that it would be an great way to share Gospel in London.

Ezri on the Tube 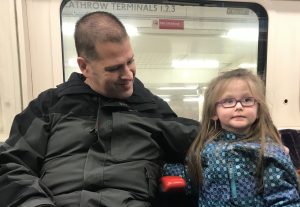 God really opened our eyes for how He can take a very common moment and use it to reach people who would otherwise be closed off to listening. It has been interesting to see how many Londoners have almost a knee-jerk negative response towards anything spiritual. A mention of God, or prayer or Jesus seems to immediately to send up a wall. When Mary Beth offered to pray for a man this week, his immediate response was to say no. But on the “tube”, we noticed that when Ezri would talk it would draw people’s attention. We noticed that people watched her and would smile at the many things she would say. But when she asked spiritual questions, it would give us the chance to answer her questions with the full knowledge that others were listening too. We were truly answering her questions but we were also indirectly witnessing.

“You shall teach them diligently to your sons and shall talk of them when you sit in your house and when you walk by the way and when you lie down and when you rise up.” Deut. 6:7

We teach our children as we go but you never know who is listening and what impact it might make.

And Ezri has her own way of witnessing too. On the tube, a lady told her that she was very sweet. Ezri responded, “God made me.” Immediately you could see the walls coming up but she softened–After all, she was talking to a 4-year old. The lady’s response was to say, “Well, I think your mummy had something to do with that.” To which Ezri responded, “No, God made me,” which gave Mary Beth the chance to affirm to Ezri, that yes, God made you and He created you for a reason. Then she continued by sharing how God showed His love by sending Jesus who died and rose again… Mary Beth was able to engage the lady in more of a conversation about this although she was very shut off to her but she “melted” with Ezri.

London has been inspiring and I long to come back to share in a variety of ways to engage people with God’s truth. 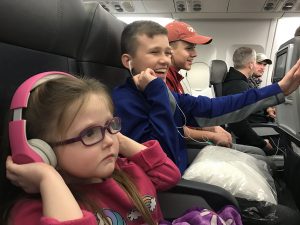 We’ll be flying out on Friday morning at 9:30 London time and arriving in Hyderabad, India at 4:50am on Saturday. To the side is a picture of the kids’ first flight on our way to England. Please pray for us as we fly again, this time over Iraq and the Persian Gulf.

Also pray that we will adjust quickly to the time change. Not everyone adjusted quickly here in London but once we land in India, we’ll have one day to settle in and adapt before beginning a very intense schedule, sharing several days in a row in the morning, afternoon and evenings. We’ll share more than 30 times in India.

Also pray for us and the spreading coronavirus and how it might affect this trip. In China cities where the virus has been confirmed have almost abandoned streets during the Chinese New Year when the streets should be full of people. We found out today that the virus has its first confirmed case in India, in the far southwest, about 10 hours from where we’ll be in Chennai. So here are a few requests:

(1) Pray the the Lord will guard our family from the virus.

(3) Pray that we won’t be quarantined as we return from India, first to the UK and then to the US. A lot of countries are requiring a two-week quarantine for anyone coming from an infected area. The week after we get back I have a revival in Lexington, TN and then another revival in southwest Oklahoma. Please pray that these opportunities won’t be affected.