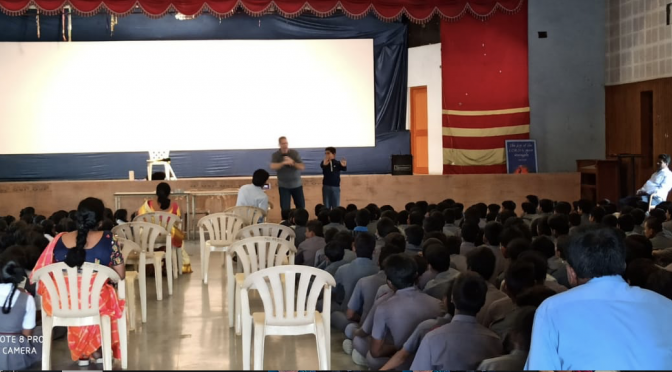 So far we’ve shared in five schools with over 1,500 students. Four of these schools gave us full freedom to share the Gospel. The fifth school wanted us only to talk about God in more generic terms because they are afraid of trouble if students go home and tell their parents that we’re trying to convert them to Christ. The interesting part is that this school is a private Christian school. They are trying to be a light in darkness but are living under the fear of being shut down. About 80% of their students are Hindu. They said that I could bring a moral message and talk about God in generic terms but not to mention Jesus. I have to admit this gave me a bit of a struggle. In my gut I don’t agree with this approach because if they’re scared they’ll be put out of business by students getting saved, are they never going to encourage students to get saved? I gave this over to the Lord and I remembered that Brother Andrew, who ministered illegally in communist countries a number of years ago, said he didn’t always agree with the decisions of people in persecuted countries but he also didn’t find it his place to judge because he had never been in their position. So I gave all of this over to the Lord and He gave me a peace about how to carefully honor their authority but walk a very fine line to point to the truth of Christ. After I finished sharing a Christian man said to me, “You did a great job sharing Jesus and how to be saved without mentioning his name.” 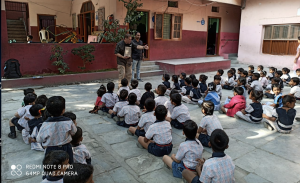 We have had more freedom at the other schools. We have shared openly about how Jesus died and rose again. We have shared our testimonies and explained how a person can be saved. But, being a school setting, we cannot give an invitation here. Nevertheless, we have planted seeds and have told the students what they can do to become a follower of Christ. The rest in the God’s hand and we’ll probably never know the result until we stand in Heaven.

The pictures below are from some of the school assemblies. Pray for these children. Some are from Christian homes and they will grow up in a culture that gives them no respect and if persecution worsens here, they might face very hard times as a follower of Christ. Others of these kids are not saved. They hear about the Gospel but they haven’t received Christ. I started one school assembly by boldly saying, “Before we begin I want you to know that Jesus Christ changed my life and I have come today to tell you that he loves you and has plans for your life.” The best way I can describe their response is to imagine a person who has just heard a stunning announcement—their eyes get wide and they pull back a little. Their response was so physically noticeable that in my head I said, “Lord, I shouldn’t have started that way. Now they won’t listen to what I have to say because they know I’m a Christian.” We had been told that with some crowds it is best to draw them in, sharing truths about life and God and then lead into sharing about Jesus because sometimes once people know you are a Christian they won’t listen to anything you say because they’ve been conditioned to put up walls because they’ve been told you’re just trying to convert them. But the Lord assured me and sure enough a few minutes later as I did my first illusion of making boxes of flowers appear out of an empty bag, the Lord help this wall to just fade away and they listened very intently. 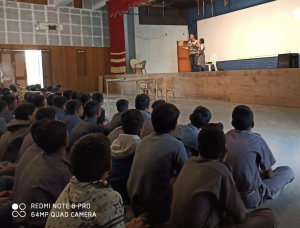 Today we shared at another Christian school. After the assembly the principal of this Christian school said, “Pray for us. We face many obstacles. It is not easy.” She continued by telling us how she wants all her students to “know Christ and His kingdom.”