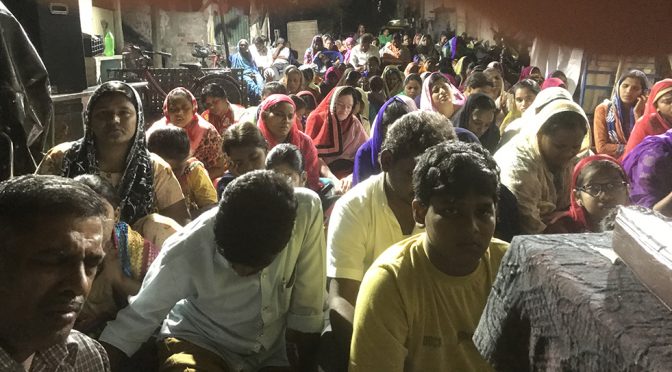 After sharing 21 times in and around Hyderabad, we drove 5 hours to Guntur City. We arrived around midnight and checked into our hotel. Our two days in Guntur City was fast-paced without a lot of rest. Although we shared only 5 times, one of the events we led was a children’s retreat in a slum colony about 90 minutes outside of the city. The next post will show you pictures and details about that event, which so far has been one of the highlights of trip.

On both evenings, we led open air outreach meetings on the street in Guntur City. The church set us up in a slum area of the city. On the first night around 200 people attended. The second night was even more filled and I spent over an hour afterwards praying with people–praying for lost husbands, addictions, for spiritual growth, for two couples whom doctors have told that they will never have children, and more. A group of children gathered to my side as I shared, standing behind their bicycles. Above me I could see people on their balconies, listening to God’s Word. And as I shared, people were walking by on a nearby street, easily within hearing of what was being said. They were out of sight for me but it was an incredible opportunity to boldly proclaim that Jesus Christ is the only way for someone to be saved.

In Guntur City several of the pastors spoke the Indian English. English is a common language here but their English is not always easy to understand. In Hyderabad we had someone who spoke very plain English which helped us understand more. But in this city there were times where I didn’t exactly know what was happening. On one night of the outreach, I sat down after the invitation and the pastor in charge called me back up. He said, “Give them another chance. Give a second altar call.” I don’t know why he said this and I never understood his reason but he was seeing something and wanted to extend the invitation to come to Christ.