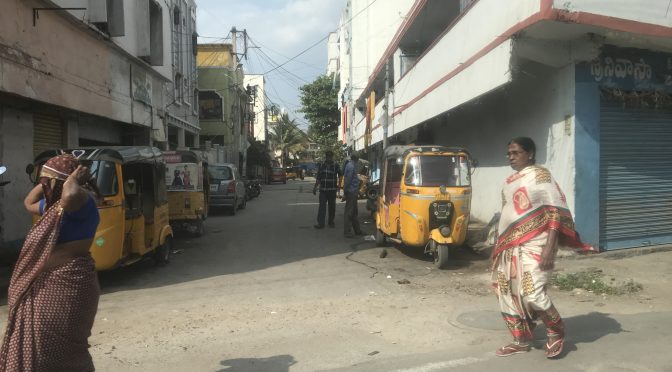 In 2 Timothy 4:2 the Bible says, “Preach the word; be prepared in season and out of season…” As Christians God calls us to be ready. On mission trips plans often change—sometime at the last minute but God always provides the strength and grace we need to be ready to share. In these situations you can rest in His resources.

On Sunday morning Mary Beth had not planned on sharing with the children during the worship service but during the singing, they asked if she could. She said yes—She simply took my backpack of resources and off she went.

Today we shared at two schools. Both had told Sunil that we could talk about Jesus and share the Gospel but 10 minutes before the first assembly he came to me and said, “The principal gave us permission to share but she is not here today. The man in charge says we can only talk about God since both Hindus and Muslims attend the school.” As I did on Monday, we shared God’s truth, knowing that when we are limited, God is not. We challenged the students that the One True God has created them for a reason and shared the story of a young man here in India who had been confused by so many different beliefs. He felt empty and knew there had to be more to life. He prayed that the One True God would reveal Himself and He did. We challenged these students to do the same.

A Christian teacher came up to me afterwards and said, “Thank you. I could feel the Holy Spirit moving.”

At the second assembly, I was told that I could talk about God and that one mention of Jesus would be fine at the end. This excited me but as I was walking to the microphone, in front of all the students, Sunil quickly came up to me and said, “Pastor (which is what he calls me) we have a problem. The principal just told me that they are concerned about trouble. They don’t want you to mention either God or Jesus.”

I committed my words to the Lord and in the few steps to the microphone God re-wrote what I needed to do and say. I shared how they are special and that there is more to life than breathing and feeling. It was similar in some regards to the school assemblies we do in America and I have no doubt that God translated His message in their hearts and that they heard far more than what I said.

Afterwards we sat down with the principal. She thanked us and expressed that she is a Christian and wants her students to know Christ. Then she told us that she would pass out the cards we had given her. We created these cards because it’s a token of respect In India to give a business card with your picture on it—So the card has our photo, a link to our YouTube channel so that English-speaking students (which all of her students are) can see more stunts and illusions (and hear the Gospel explained in a variety of ways). It also has links to the Bible in their native language, etc. Not all of the schools have agreed to give these. One school said that they would give them only to the Christian students.

Then I reflected back to the first school. The same man who told us that we could not mention Jesus also told me, “You have a beautiful family. You remind me of another missionary family (whose name I didn’t recognize) who was martyred by Hindu extremists for sharing the Gospel.” I wonder now if his intention was the same.

Either way, God is moving. We’re planting seeds as best we can and praying that those seeds land on good soil where they will grow and produce a great harvest.

Pray for these children that to whatever extent they heard the Gospel that God will begin a search in their heart, a hunger that won’t be satisfied until they find Christ.