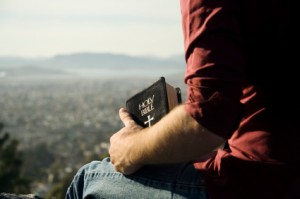 There is one God, the Creator and Ruler of the universe who has eternally existed as three separate and distinct Persons: The Father, the Son, and the Holy Spirit. God is all-powerful, all-knowing, and everywhere. He is just. He is love. And He is patience, not willing that any should perish.

Christ is the Son of God. Jesus was born of a virgin as both God and man, lived a perfect human life even though He was tempted in every way as we are. As the perfect “Lamb of God” He gave His life as a sacrifice for our sins by dying on the cross. He was buried but rose from the dead three days later, conquering sin and death and later ascended to Heaven, where He is the intercessor and the advocate before the Father for all those who receive Him as Savior and Lord. Someday He will return again to gather up His people and to reign as King of kings and Lord of lords.

The Holy Spirit is the third person of the Trinity. He is present in the world to make men aware of their need for Jesus Christ. He also lives in every Christian from the moment of salvation. The Holy Spirit convicts the world of sin, of righteousness, and of judgment. He provides the Christian with power for living, understanding of spiritual truth, and guidance in doing what is right.

The Bible is God’s Word to all men. It was written by human authors under the supernatural guidance of the Holy Spirit. It is the sole authority for Christian beliefs and God’s guide for how to know Him, how to walk with Him and how to live for Him. Because it is inspired by God, it is truth without any mixture of error.

Man is made in the image of God, to be like Him. He is the supreme object of God’s creation and the “apple” of His eye. And, although, Man was created without sin, Adam and Eve’s disobedience in the Garden of Eden introduced into Mankind a sin nature. We have all sinned and because of sin, we are separated from God. This is the reason that we all need a Savior, Jesus Christ.

Man was created for an eternal existence. Physical death is not the “end” of Man. After death each person will spend eternity either in Heaven or in Hell, two very real places. Only those who have given their lives to Christ and by so doing have been forgiven and have entered into a relationship with God will go to Heaven. Those who have rejected Christ as their Lord and Savior will spend eternity separated from God in a place called Hell.

Salvation is the free gift of God, provided by Jesus’ sacrifice and offered to all people. Salvation cannot be earned by good works, by church attendance, by baptism, etc., but only comes by faith through grace when a person accepts Jesus Christ as his or her personal Lord and Savior. Eternal life begins the moment one receives Jesus Christ into his or her life by faith.

God has ordained the family as the foundational institution of human society. Marriage is the unity of one man and one woman in covenant commitment for a lifetime. The husband and wife are of equal worth before God, since both are created in God’s image. The marriage relationship models the way God relates to His people. Children, from the moment of conception, are a blessing and heritage from the Lord.